Below is an overview of notable patents that were issued by the United States Patent and Trademark Office (USPTO) in FY21, including a concise description of what is novel about the invention, what useful applications might be, and how it might be adopted commercially.

The technologies listed below may be available for licensing by industry. If interested, please email ott@jpl.nasa.gov.

Infrared sensors are used in motion detection, night vision, and in astronomy. Photodetectors work on the principle that light can be converted into electricity.

Light in the infrared range, which we can sometimes feel as heat, is carried by photons that have little energy (lower frequencies) compared to visible light (higher frequencies). Therefore, infrared light is comparatively more difficult to detect than visible light. Barrier infrared detectors (BIRD) devices are a type of very sensitive photodetector designed specially to detect infrared light. This patent discloses the science and the methods of making new kinds of BIRD devices.

In this type of photodetector, when a beam of light is directed at a semiconductor, some photons in the light beam are absorbed by a semiconductor to generated mobile electron-hole pairs. The electrons and holes then move under the influence of an applied electric field and are collected at the electrical contacts as an electrical signal.

The BIRD devices described in this patent contain both p-type and n-type semiconductor infrared absorbers to provide enhanced quantum efficiency (i.e., they are able to generate a stronger electrical signal) over the previous generation of BIRD devices. These BIRD devices have very specific geometries and layers in their construction that contribute to their properties.

The IR detector has layers that include a p-doped contact layer “p+,” an electron unipolar barrier “B,” a p-type absorber section “p,” an n-type absorber section “n,” and the highly n-doped contact layer “n+.” The artwork shows arrangements of the layers. These devices have been fabricated and developed continuously at JPL’s Microdevices Lab over many years. 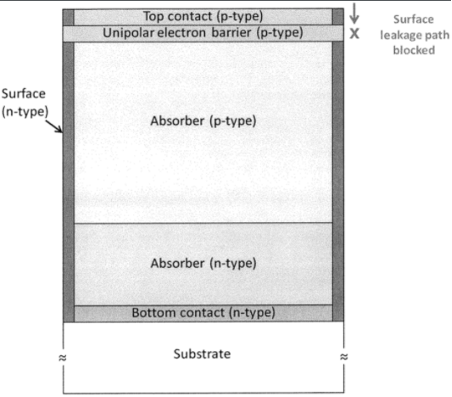 We use computers every day, in our phones, cars, appliances, and in many electronic devices. Spacecraft are also controlled by computers, and when they fail or have errors, the consequences can be severe, including loss of the spacecraft. To mitigate this risk, researchers at JPL have focused on an area of computer science known as fault tolerance.

The idea of fault tolerant computing is that a control or processing element of a spacecraft will be able to tolerate a fault, and still continue to perform its function, but in a degraded state. Faults might appear as an incorrect calculation result, random garbage data appearing in memory, or a complete cessation of processing of machine instructions.

There is almost no cost-effective way to repair or replace a failed computer in a spacecraft once it has left the ground and commenced operating in space, so fault tolerance is a critical design feature for space systems.

The environment of space is harsh with radiation, such as cosmic rays, which cause electronic components to encounter errors or fail randomly. Cosmic rays also damage human DNA and are a risk of space habitation and travel. We know from tests on the ground when electronic components might fail on a statistical basis. When there is a failure in the spacecraft, there must be a way to detect and switch over to a backup unit to keep the entire spacecraft functioning.

This patent discloses a method and design to detect and handle faults that occur in electronics subsystems in a very small size package and using low power (low SWaP), made possible using field programmable gate array (FPGA) technology. JPL has developed the design and architecture for a Fault Tolerant Management Unit (FMU) which is disclosed in this patent. 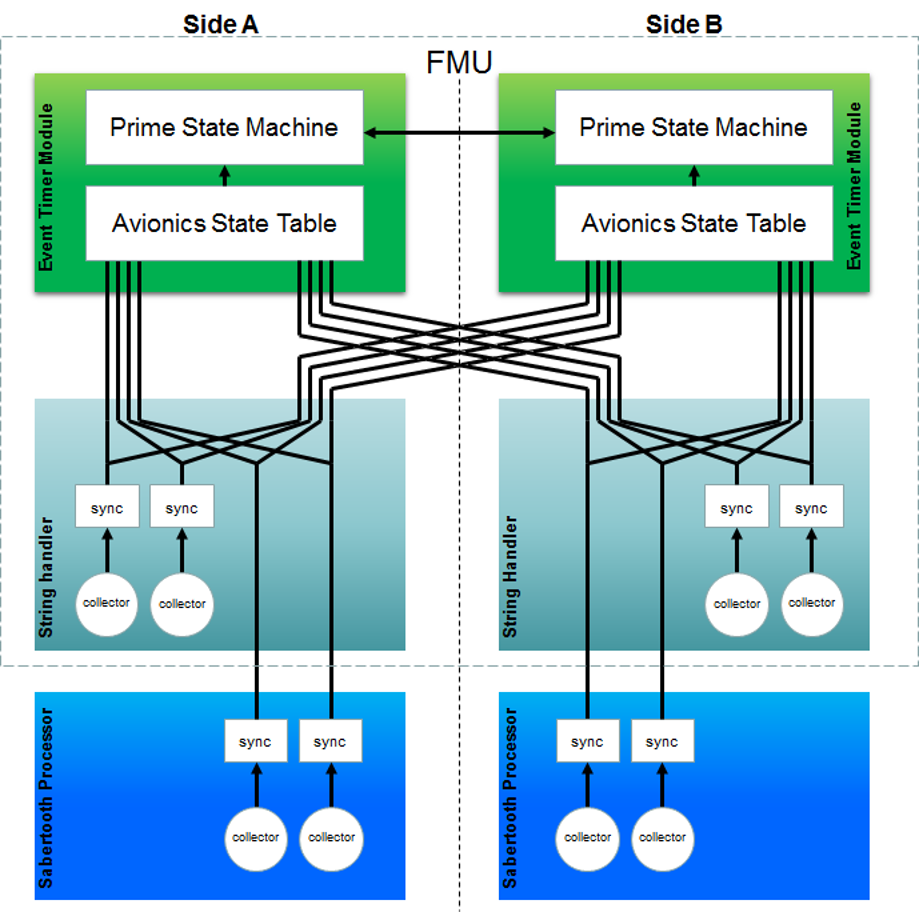 This patent discloses a new subsurface imaging technique that provides information about the shape, volume, and dielectric properties of underground structures. This is achieved using low radio frequencies (RF) that are transmitted using a ramp-shaped waveform. Low RF energy has lower attenuation compared to the penetration losses of typical state of the art sounder radar frequencies.

This technique can detect and image underground aquifers, magma chambers, synthetic tunnels, and other underground structures, as in the example shown.

The traditional approach is to directly observe or image structures or voids beneath ground, from an airborne or non-grounded sensor, using sounding radar instruments. Due to the use of high frequencies, sounding radars cannot penetrate deeply into lossy dielectric or conducting earth, because the high frequency radar waves are attenuated by absorption in the ground.

This invention makes use of electromagnetic (EM) waves scattering phenomena for both imaging and measurement. When EM (or radio waves in this case) encounter an object, they can be absorbed (e.g., by food in a microwave oven), be reflected (e.g., by a mirror), be refracted (e.g., bending as in eyeglasses), or be scattered in many directions (e.g., by an opaque wall). The manner in which these waves scatter depends on the size of the obstacle compared to the EM-radio wavelength, or the size-to-wavelength ratio: 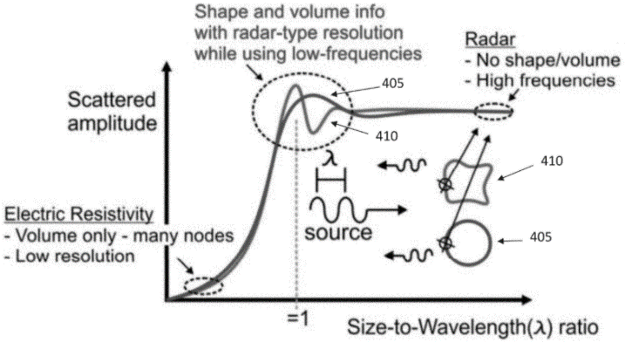 In summary, resonance scattering gives information about shape and volume of the structure or voids which are being imaged below ground level. Resonance scattering requires wavelengths that are comparable to the size of the dielectric body or void. Therefore, for large structures such as tunnels, aquifers, or magma, etc., long wavelengths are utilized. The long wavelengths, corresponding to low frequencies, penetrate deeper than traditional ground-penetrating radars or sounding radars, but require different techniques for image formulation than those used in sounding radars.

While sounding radars are limited to imaging of any void or structure at depths of only a few tens of meters, in any lossy ground, this resonance scattering invention permits significantly deeper penetrations, due to low attenuation losses. This could be an important capability for many industries and applications that require imaging and analysis of the earth and below the earth surface. 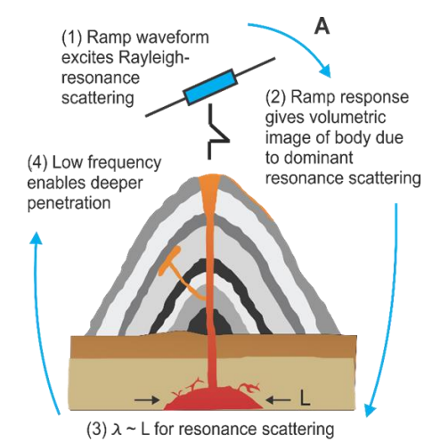 This patent discloses an improved power system that is tailored for spacecraft operating in deep space, which is defined as farther away than the Moon. In deep space, as we move toward the outer planets particularly, there is less solar energy available, since the sun is farther away, and electrical power must be managed in a wide variety of conditions. In spacecraft with an Electrical Propulsion System (EPS) such as a Hall Effect Thruster (HET), the output electricity from the solar arrays (which convert sunlight to electricity) must be carefully managed, which is what this invention addresses.

A spacecraft power train has a power converter that receives input power from a solar array and supplies output power to the EPS usually around 100 volts. The power converter can be configured to operate at peak efficiency during critical low power phases of the mission (near the maximum distance from the Sun where the least power is available). 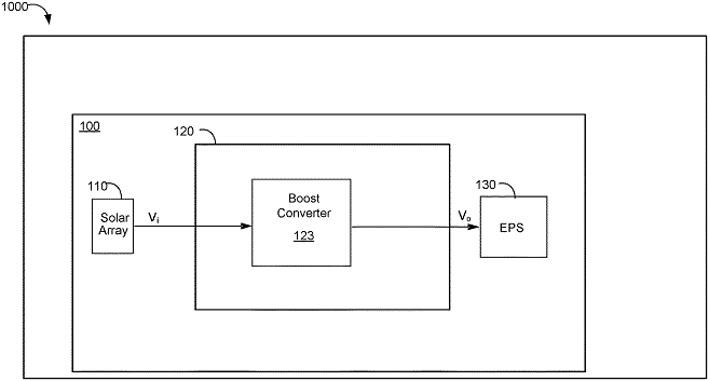 With the technology in this patent, the cost of deep space missions can be reduced by using commercially available satellite components that are optimized for use in Earth orbit. For example, solar powered electric propulsion subsystems for orbit transfer and orbit maintenance of Earth-orbiting spacecraft, now widely used for commercial spacecraft, may be adapted for use on spacecraft configured for deep space missions.